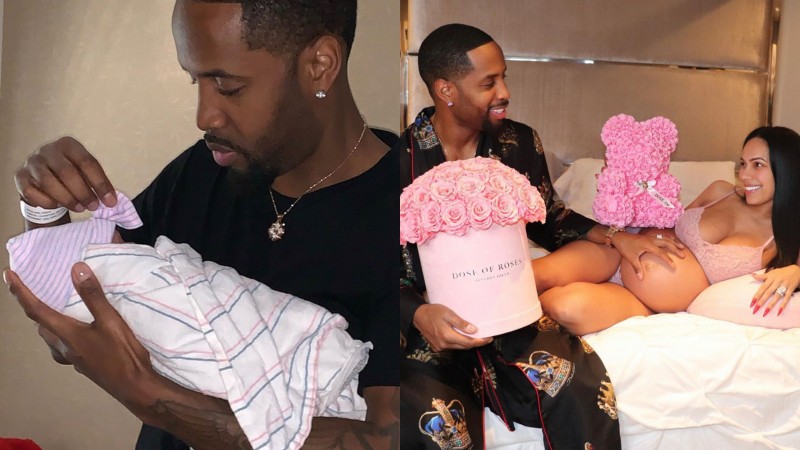 “These past 24 hrs have been an adventure to say the least!! I’m a part of the #girldad club now 🙏🏾” he wrote alongside the sweet shot referring to the social media hashtag inspired by the late Kobe Bryant’s approach to fatherhood. “Perfection is here.”

Samuels did not reveal the name of his new daughter.

According to the rapper, he was actually on his way to a show in Rhode Island when his Mena’s water broke. He abruptly canceled the performance to witness the birth of his baby girl.

“Sorry to everyone who came out to see me in Rhode Island last night, as I was getting ready to leave my wife’s water broke,” he wrote in a post on Instagram Story.

Samuels then shared a picture of his baby girl’s footprint.

“She inspired this,” he captioned the post, which linked out to his new “Purpose of Love” music video with Loomis.

The musician later shared a picture of him holding the newborn.

Safaree Samuels and Erica Mena announced the pregnancy last year days before getting married on Oct. 7, 2019.

“Wow, wow, it’s a big deal! Very big deal. I didn’t know I was capable of doing this. I’m excited!” Safaree said in a video of their pregnancy reveal. “I’m nervous. I’m in shock. I’m in disbelief. It’s very surreal to me. I don’t know what to do but I know I’m going to be great at what I do, because I’m great at everything

Erica Mena, who is also mother to son King from her previous relationship with Raul Conde, said at the time that she plans to raise her little one away from cameras.

“We’re going to be selective but at the same time, this baby will come out of the womb working,” Samuels explained. “I was working very early.  I’m about to pull a DJ Khaled. As soon as this baby comes out, we are working.”

The ‘Love and Hip Hop’ star says she’s “just here staring at my husband as he obsesses over our daughter. I thank God. I prayed for this life.”

As we reported … Erica turned tradition on its head by gifting Safaree some bling for the pregnancy, dropping nearly $50,000 on a custom diamond chain that comes with a white gold “Daddy” lock.

Erica and Safaree tied the knot back in October in a big ceremony at a castle in New Jersey … and now they’re starting their own family.

CONGRATULATIONS TO SAFAREE AND ERICA!

LILO BLAMES ERIC FOR LOSING HER FOCUS IN THE HOUSE

SOPHIE TURNER AND JOE JONAS WELCOME THEIR FIRST CHILD TOGETHER